Hair styles vary widely. From different age groups to different lifestyles, hair is a sign of personality and can completely transform your appearance and self-image! You can style your hair wild and free or elegant and sophisticated. You can dye your hair a bold new color or give it a subtle updated look with highlights or lowlights. Hair can provide confidence and conviction in the way that you carry yourself and interact with others.

With all that in mind, the reality of hair loss can be jarring to say the least. Hair loss can happen to anyone at any age for a multitude of reasons and affects both men and women. If you’re interested in keeping your hair as youthful-looking as possible, It is important to keep in mind what hair loss looks like so that you are able to get an early start on treating it. 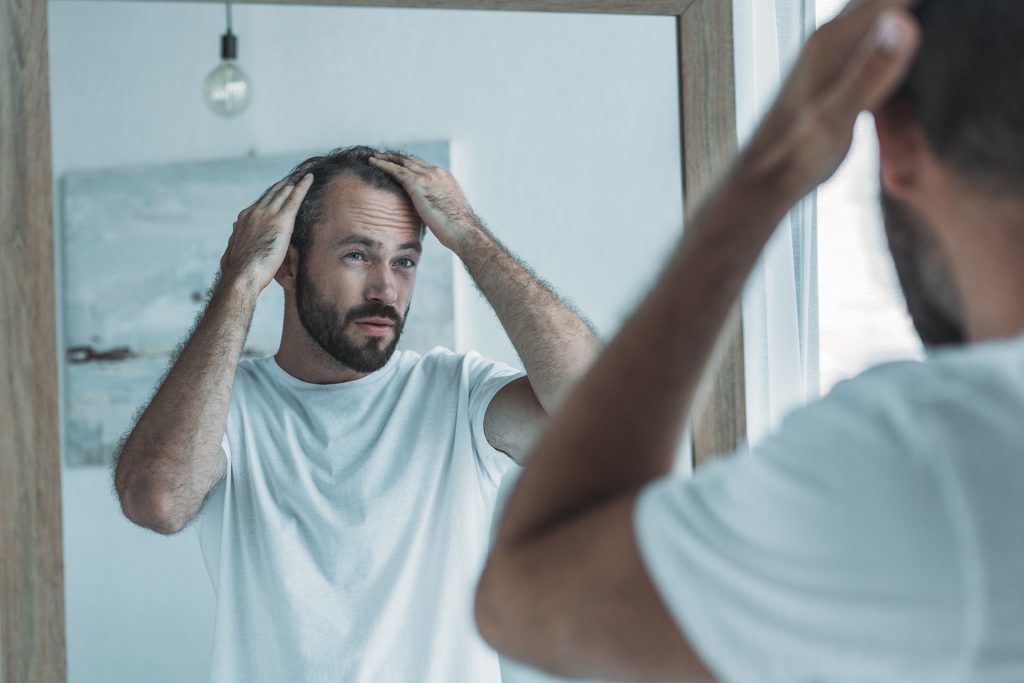 In the United States an estimated 50 million men are affected by hair loss. Male hair loss is influenced by a family history of baldness. It has been found that with male pattern baldness there is also a connection with the androgens and how they facilitate hair growth.

Male pattern baldness- or androgenic alopecia- is hair loss that occurs at the crown (or top) of the head and the temples. In men this can give the appearance of a widow’s peak.

Female hair loss is discussed less widely than men’s hair loss but happens all the same. Although there’s the options of wigs or certain hairstyles to cover up hair loss, the best option is treating your own natural hair that is growing from scalp.

As with the elasticity of skin, after the age of 50, hair follicles begin to shrink. This shrinking of the follicle leads to the hair that is growing to be thinner and lack the volume it once had at a younger age. It has been found that two-thirds of women may begin to suffer from bald spots after menopause as well.

The specific ways and patterns that arise when women lose their hair is different from men and called androgenetic alopecia, more commonly known as female pattern baldness. With men, where their hair loss begins at their hairlines or crown of their hair, for women it begins more in the natural body of the hair.

There are three types of female pattern baldness. Type 1 is minimal thinning. This is where you can especially hide trouble areas with different styling techniques. With type 2, the thinning becomes more widespread and widens the natural ‘part’ in your hair. Type 3 is when thinning is present all throughout your hair leaving a particularly noticeable thinned out area at the top of your scalp.

When it comes to hair loss, tackling it sooner rather than later is the right approach.  When you begin to see signs of your hair thinning or want to revitalize your hair in general, come visit the team at Hall and Wrye!